Killing at the Rancho Cucamonga Animal Shelter is Sadly, Not "Taboo"

In a Daily Bulletin article Animal Shelter Director Veronica Fincher states, “All options are
exhausted before an animal is euthanized, and the center engages in outreach to rescue
organizations, support shelters and the public.”
See the full Daily Bulletin Article Here

This is Taboo who came into the RC shelter October 17, 2014 surrendered by her owner. She is
described as a Female Blue Pit Bull, 1-year 2 months old.  A note dated October 28, 2013 says the shelter had fined the owner for Failure to License & Vaccinate and a citation for a Potentially Dangerous/Vicious Animal. Taboo was running at large and had caused a person to fall and get hurt. She would have only been about 4 months old at that time, still a puppy and her behavior could have been misinterpreted by the individual; but the shelter was already labeling her.


Taboo was initially placed in isolation Kennel 51 where she cannot be walked by volunteers. The
shelter did not bother to change her negative name. No shelter dog should ever have a negative name, especially pit bulls that have such a hard time getting out alive.

October 21, 2014 RC Shelter notes: Taboo is scared, shaking and growling in the kennel. Remember this is a young, active dog that has been locked up for 4 days where she can sense fear and smell death: 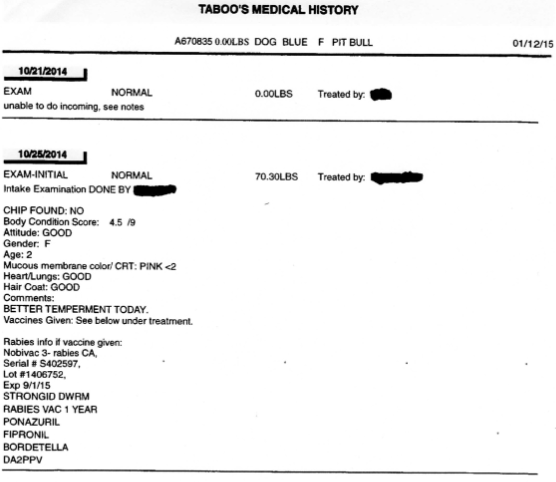 Taboo remained in Kennel 51, isolation, for another 43 days. Not getting walked, not even getting to go outside to go to the bathroom. An evaluation was done with Taboo and another dog. Taboo was interested in greeting the dog and offered a play bow: 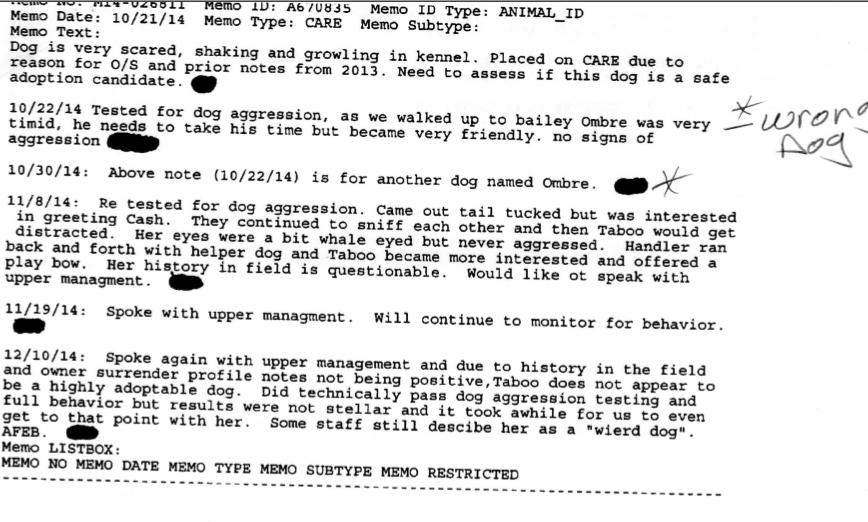 Then on  December 5th the Shelter conducted a full Evaluation. The notes stated:
“12/5/14 Did a full eval on Taboo. Re-dog tested with Jagger and Phillip. She was a bit tense with Jagger but showed no signs of aggression even when Jagger became excited and jumped on her twice. With Phillip she was more comfortable and even appeared to want to play. Her body posture remained soft the entire time with Phillip. During sensitivity handling she would spin around quickly but never attempted to put her mouth on the handler. It was almost as if she was just itchy and it was a reflex to spin around. She passed toe pinch, ear examination and tail pull. During muzzle hold her eyes remained soft and she would make brief eye contact but then softly turn away all 3 times. She became very playful during tag and play and never jumped up on the handler. She
allowed removal of the rope toy and seemed more interested in playing with the hand. She
did take possession of the squeaky stuffed toy and tried to avoid having it removed but never
offered a growl. She did eventually allow the toy to be removed. She passed all aspects of food.” 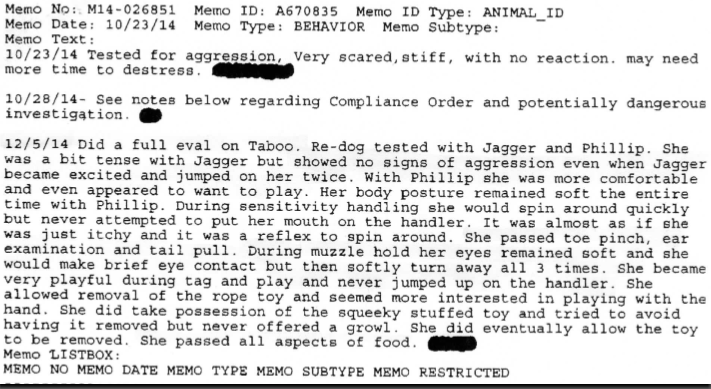 These are very positive notes.

On December 8th she’s in Kennel 24 and finally on the adoption floor after 52 days in isolation.
Four days later, on December 12th, the shelter kills Taboo. They never reached out to any
rescues or demonstrated that they "exhausted" any other options.

Taboo’s kill notes say she did technically pass dog aggression testing and full behavior, but
results were not stellar and it took a while. The highly qualified, trained expert then writes, some staff still describe her as a “weird dog”. This contradicts her full evaluation 5 days earlier. The shelter and city council failed this dog and many more.  We are going into year 3 and this shelter has not gotten any better. The volunteer hours are still down even with lots of embellishing (Discussed at the January 21, 2015 RC City Council Meeting, see link below to watch the full meeting). It’s obvious fundraising means more to the city council than the day to day quality of animal life in the shelter.

Taboo did not need to suffer a lonely, frightened life for almost 2 months and then killed. No
attempts or options were “exhausted” to save her.  This is why volunteers like THAT Group are
needed, who proved multiple times that they could help with behavioral training and getting dogs to
rescues before being needlessly killed.  Director Fincher who is not a caring, compassionate director, wants volunteers who will be the voice of the animals out. Her actions prove this and city council keeps ignoring the facts, the truth. They continue to mislead RC citizens so we must pull records and expose the heartbreaking truth that animals are indeed suffering under the regime of Director Veronica Fincher.

All of this information was presented to the City Council at the January 21, 2015 meeting. With the
exception of Councilman Bill Alexander, the Council has remained silent on the unnecessary killing of treatable and adoptable dogs. It doesn't have to be this way, and it is the public that needs to help lend a voice to those who cannot speak for themselves, the animals.  Killing treatable animals should be taboo at the shelter, but they have demonstrated year after year that is not the case. RIP Taboo.

Visit our website http://www.thatgroup.info/ to contact the RC City Council and ask them to get the shelter back to it's original no kill goal. You can also view videos of some of the other dogs that needlessly lost their lives at the Rancho Shelter. To view the January 21, 2015 Council Meeting, click on the link below and then click on Video on the Jan 21 2015 meeting. Comments regarding the Animal Center can be seen under Public Comments section of the meeting:

http://www.cityofrc.us/cityhall/council/videos.asp
Posted by THAT Group at 9:03 PM