"Shelter Math" is a term that is used to describe the creative categories that many shelters, Humane Societies and other animal organizations use to help boost their Live Release Rate (how many animals came in alive and how many of those leave the shelter alive). Live Release Rate (LRR) should not be confused with a shelter's Adoption Rate, which is the number of animals that were actually adopted by an individual. LRR can include adoptions and animals sent to rescues, because these are the actual Live Outcomes for those animals. However, shelters with poor practices and policies can create clever columns and fancy reports that can hide their true LRR. Or to put it in even simpler terms, not being transparent as to which animals lived and which animals died.

Shelter Math is the go-to-formula that the Rancho Cucamonga Animal Care and Adoption Center (RCAC) depends on, in order to deceive the public and City Officials into believing all "adoptable" animals are being saved. In their 2013 Annual Report (which was released by the Shelter in June 2014), a number of categories are used to show what the particular outcome was for a percentage of animals: 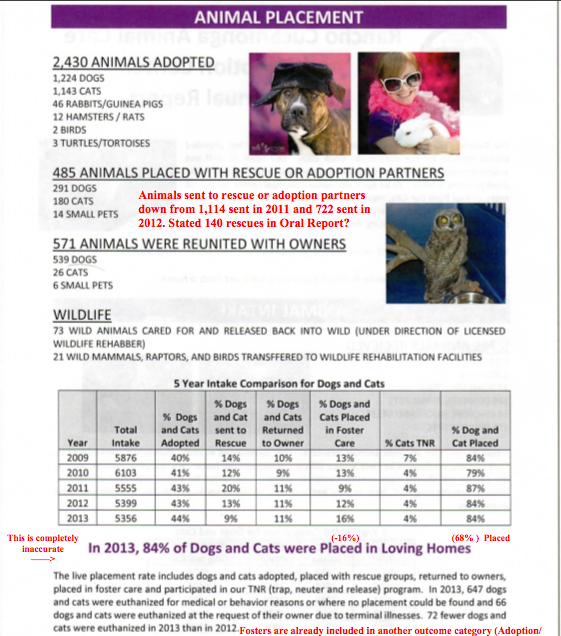 The categories listed in the Annual Report for the animal outcomes are: Adopted, Rescued, Returned to Owner (RTO), Foster Care and TNR. However, on other reports, RCAC also uses Transport and Transfer to other shelters (sometimes referred to as "Other Live Outcome"): 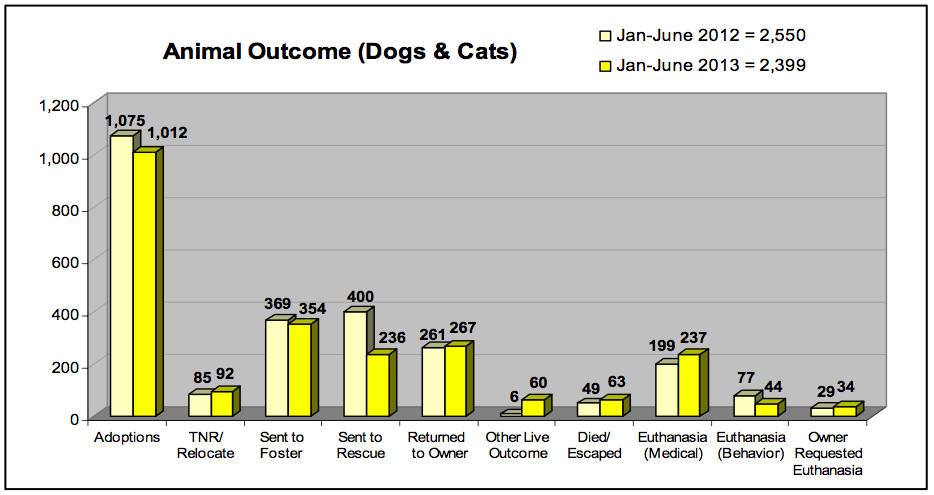 "Other Live Outcome" is seen on the 2013 mid-year report, and a significant jump from the previous year.

This category is virtually unexplained, and the jump from the 2012-2013 number is also questionable, and not explained in the 2013 Annual Report. But the category that should win the most creative use for numbers in order to create a higher LRR goes to RCAC's "Foster Category"; so everybody, get ready to do your math!

According to the 2013 Annual Report, 837 dogs and cats were placed in foster care prior to adoption. The animals were later returned to the Animal Center for placement. Their final placement is included in the animal placement statistics.

The Director counts Dogs and Cats placed in Foster Care, as its own placement/outcome category on Page 2 of the report, listing it as 16%. But this is a floating category, because the Director has already stated that the animal's final placement is listed in another category.

One must look at the hard data regarding the income and outcome of every single animal that came in to RCAC in 2013. This means one must comb through 92 pages of data to do so. "Who has the heck has the time to do that you say?" THAT Group does, and we did! The City of Rancho Cucamonga Outcome Totals for 1/1/2013-12/31/2013 was posted to the City's website in February 2014, however, once discrepancies in RCAC's numbers were brought to the City Council's attention, the outcomes could no longer be found on the website (different from the Year End Statistics Report that is posted on the RCAC page). Feel free to check the link where the numbers were posted. Go ahead, we'll wait...http://www.cityofrc.us/civica/filebank/blobdload.asp?BlobID=17248

Why would the City remove this data? It can still be requested through a Public Records Request, if you know what to ask for and are willing to pay for the copies. Here is what this data looks like: 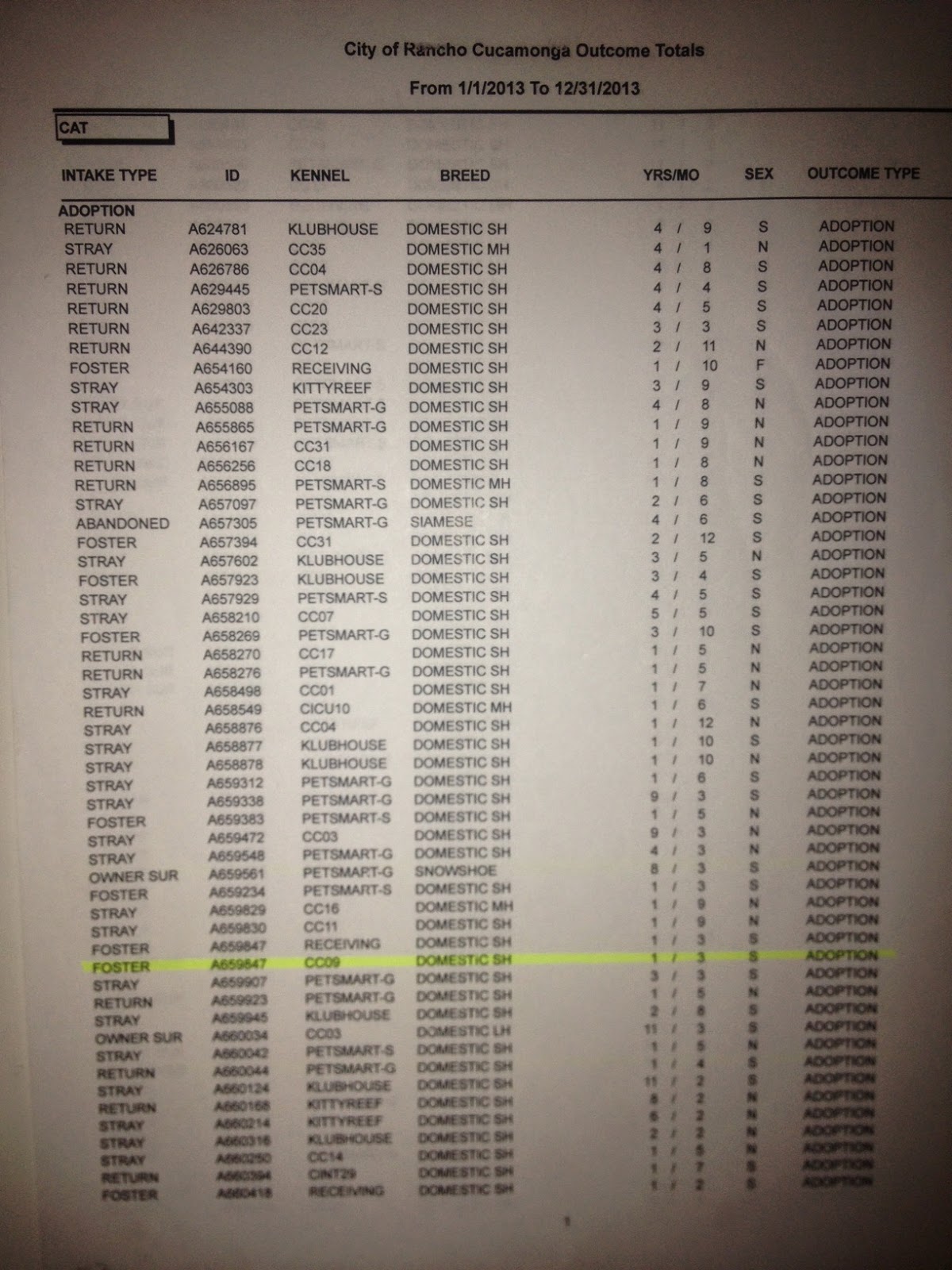 Now add 91 more pages and you have the income and outcome totals for all the animals that entered the RCAC in 2013. When looking at the individual outcomes for each animal, one can see what the final placement was for that specific animal. Were they Adopted, Rescued, TNR, RTO, Euthanized, Died or Missing? It was by going through this data line by line, that we were able to see the same animal being counted two, three, four and even five times as having multiple positive outcomes. This is why the 16% of dogs and cats placed in Foster Care in the Annual Report, is extremely misleading, because this category is being double-counted, in order to boost the live placement rate for the shelter. Several individual cats and dogs are counted multiple times in the Center’s Outcome Totals, and it is assumed it is because a single animal is sent to multiple foster homes before it reaches its final placement. When looking through the 92 pages of the Outcome Totals for 2013, 106 cats are counted multiple times, and 8 dogs are counted multiple times. This means that 723 individual animals were actually sent to foster, not 837 reported on Page 3 of the Annual Report. Yet the higher number is used to boost the overall live placement rate. In the annual report, the Director took the 837 ÷ 5356 (Total 2013 Intake) = 15.6%, which the Director rounded to 16% Dogs and Cats Placed in Foster Care.

By creating a separate outcome category for Foster, even though that is not the final placement for that animal, it serves to boost the live release rate. For example, on Page 35 of the Center’s Outcome Totals for 2013, two cats are given multiple positive outcomes. Cat #A664214 and #A664215 were both initially brought in as STRAY. They were then placed in the FOSTER category three separate times, making it look like eight individual cats had a positive outcome: 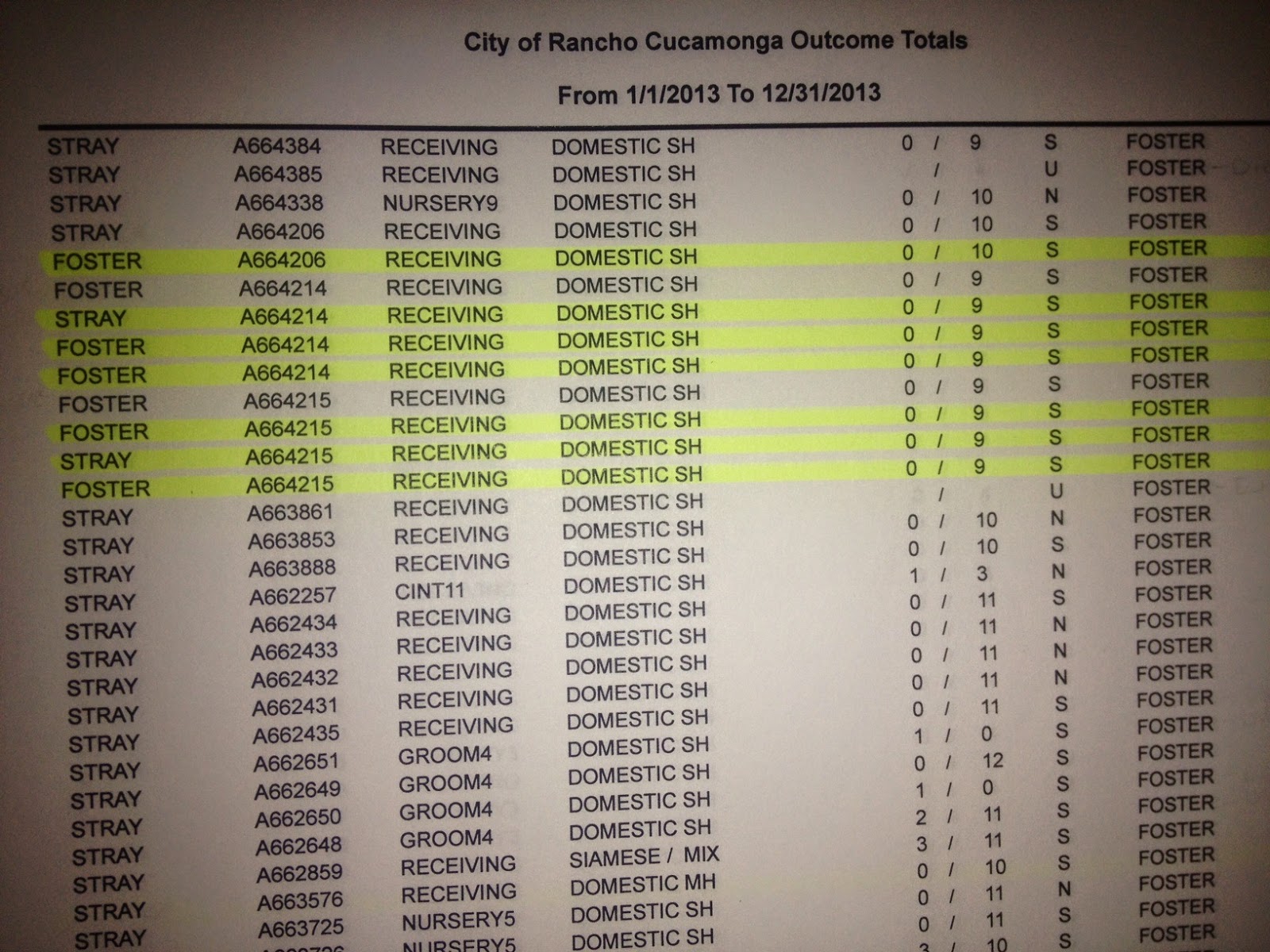 Fortunately, when you look at Page 46 of the Outcome Totals, both cats are listed as RESCUE. However, not only were these cats counted three times each in the Foster category, they were also counted in the Rescue category since that was their final placement. This means they are counted in the 16% Dogs and Cats Placed in Foster Care and the 9% Dogs and Cats Sent to Rescue categories: 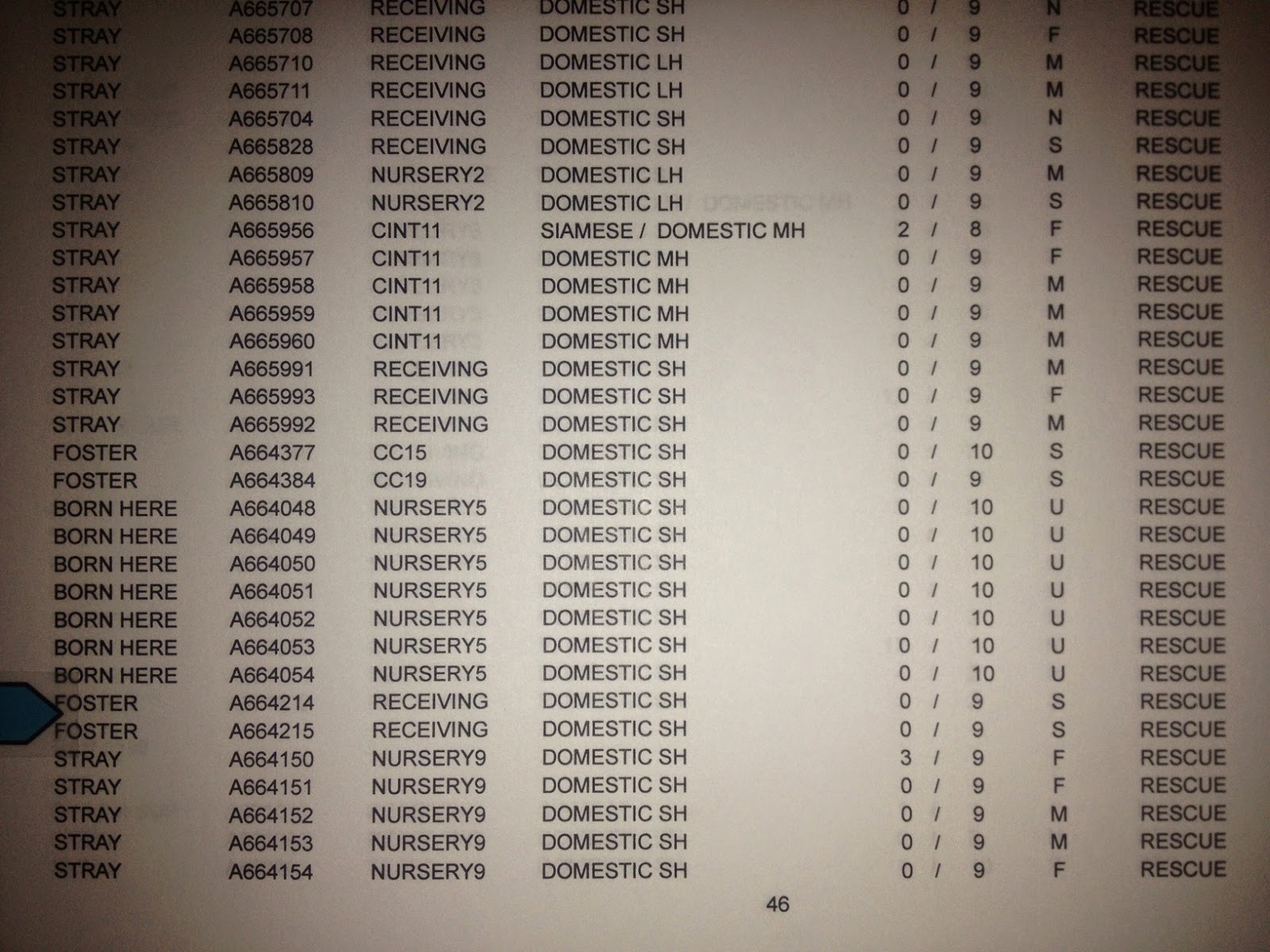 Sadly, this strategy is used even if death is the ultimate outcome for that animal. An example of this can be seen on Page 41 of the Outcome Totals for 2013, when looking at the journey of three cats: #A667791, #A667790, and #A667792. Each cat is listed with two Intake Types: STRAY and FOSTER. This means the three cats were brought in as strays, but were then sent to foster, which is counted as another live placement outcome by the shelter and included in the 16% Foster Category, and ultimately in the final 84% Placement Total for the Animal Center. 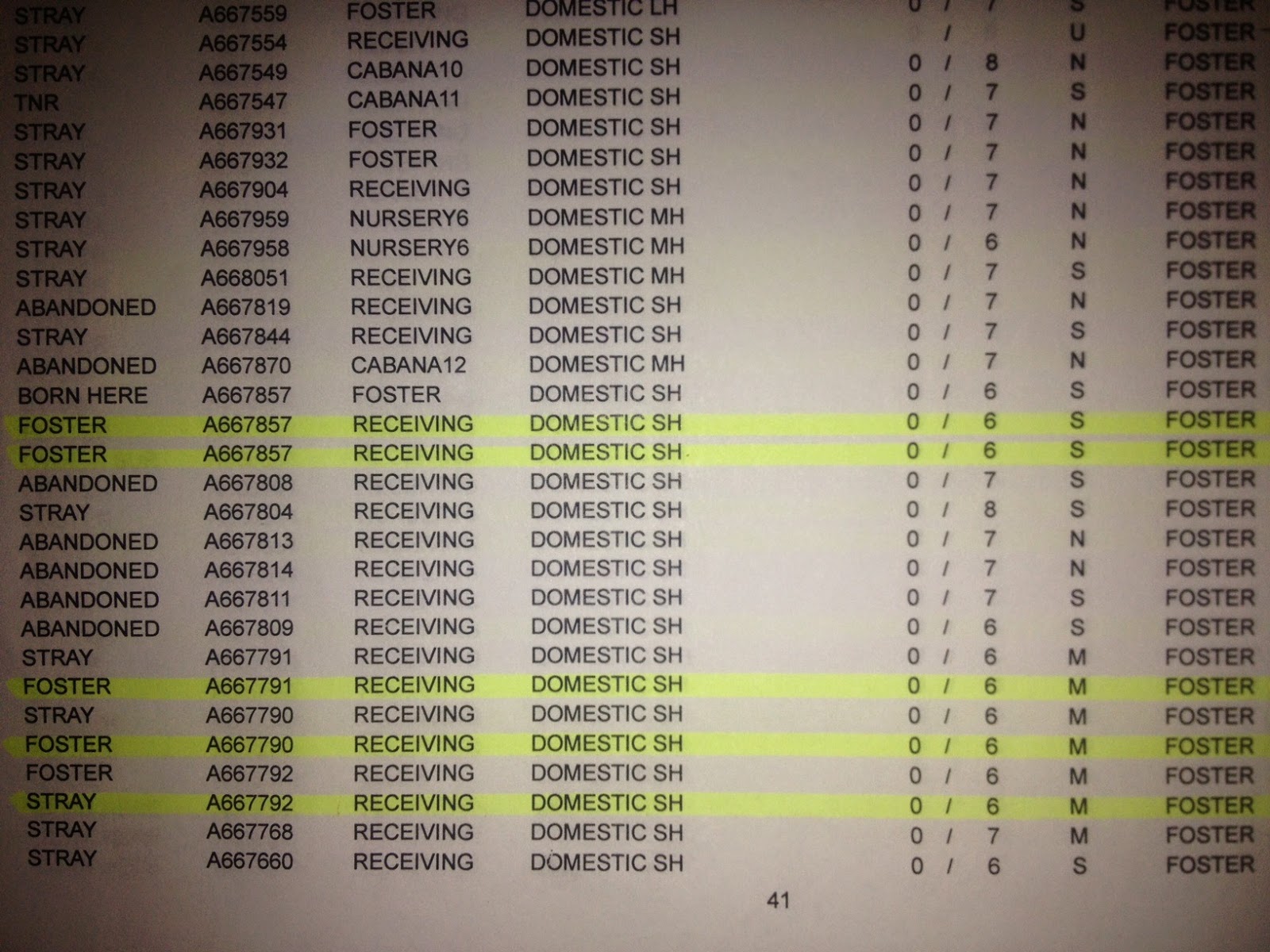 However, what was the actual final outcome for those three cats? Sadly, it was not in “loving homes” like it is stated on Page 2 of the Annual Report. When you look at Page 21 on the Outcome Totals, and the final Outcome Type, cat #A667792, is listed under DIED. 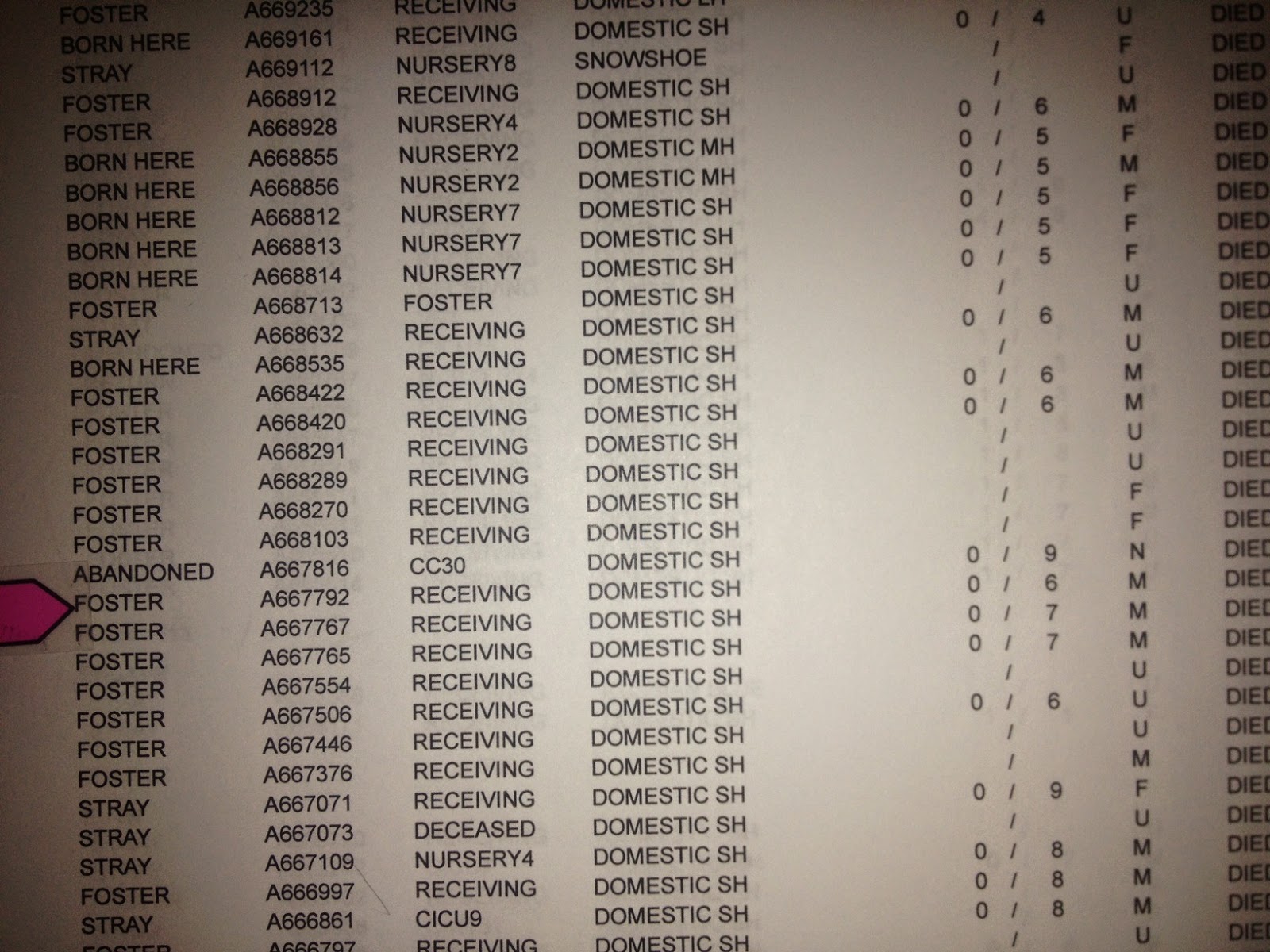 On Page 23, cats #A667791 and #A667790 are listed under the EUTH category. Yet their deaths are only listed once, and having moved them to the Foster category and counting them multiple times still boosts the overall live release rate. Meaning their deaths technically does not count in the overall statistics. 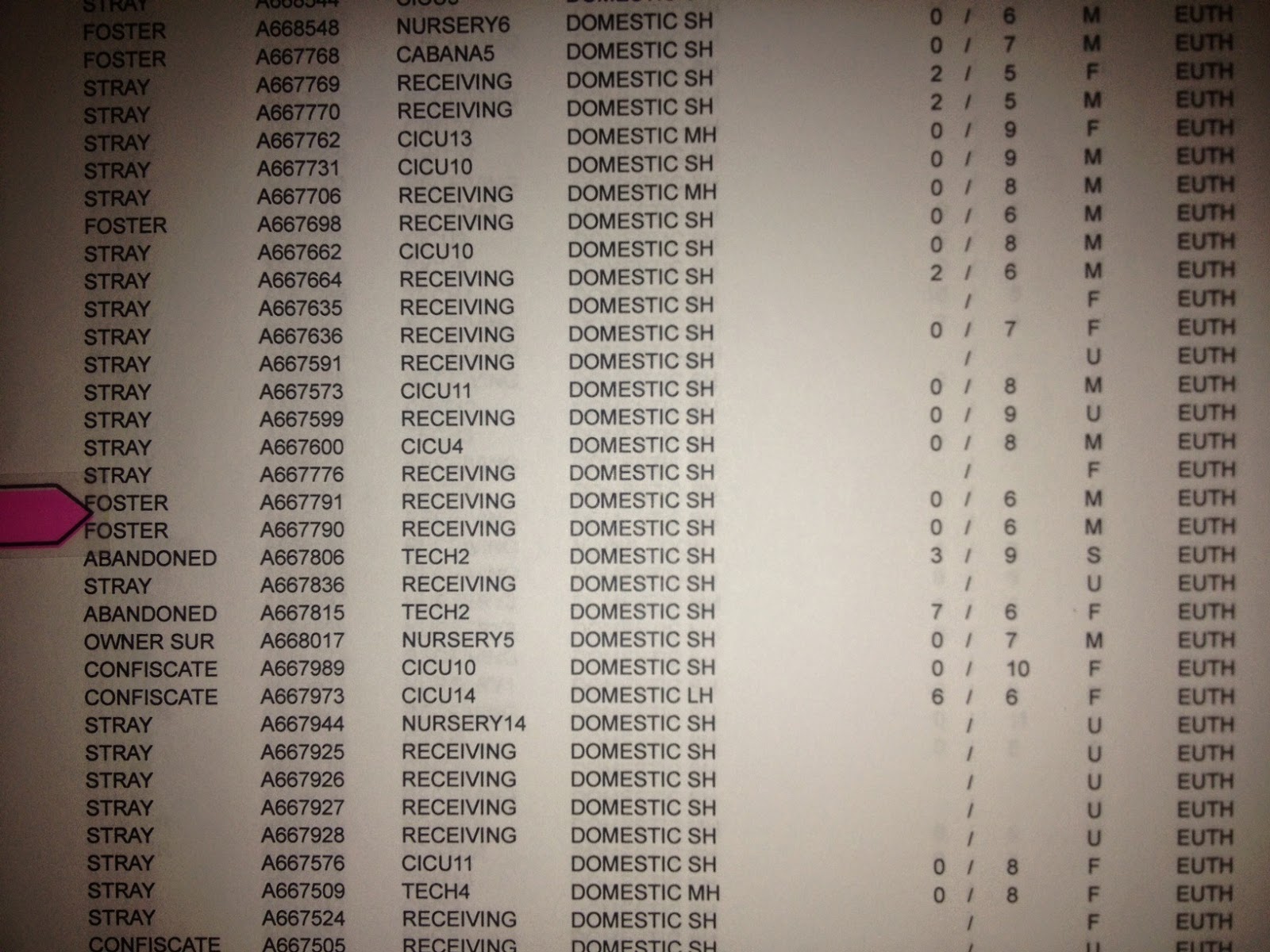 Stating that, “84% of Dogs and Cats were placed in loving homes” is completely inaccurate, because it has been demonstrated that a number of animals died or were euthanized, but they are hidden within the separate Foster Care category.

This category should not be counted as a final outcome, because that is not the case. The animals have a final placement and they are already counted in those categories. Therefore, by removing this category from the placement total: 84%-16%, the live placement rate would actually be 68%! In 2005, Nathan Winograd stated “No Kill” should be at 90%, but this number has since increased, with some facilities hitting 95-99% of all animals. This includes Open Admission shelters as well.

Multiple kittens were killed in 2013, because no foster could be found by the end of the day. There is no indication on the individual records for those kittens, that the shelter actually made attempts to contact the foster list. 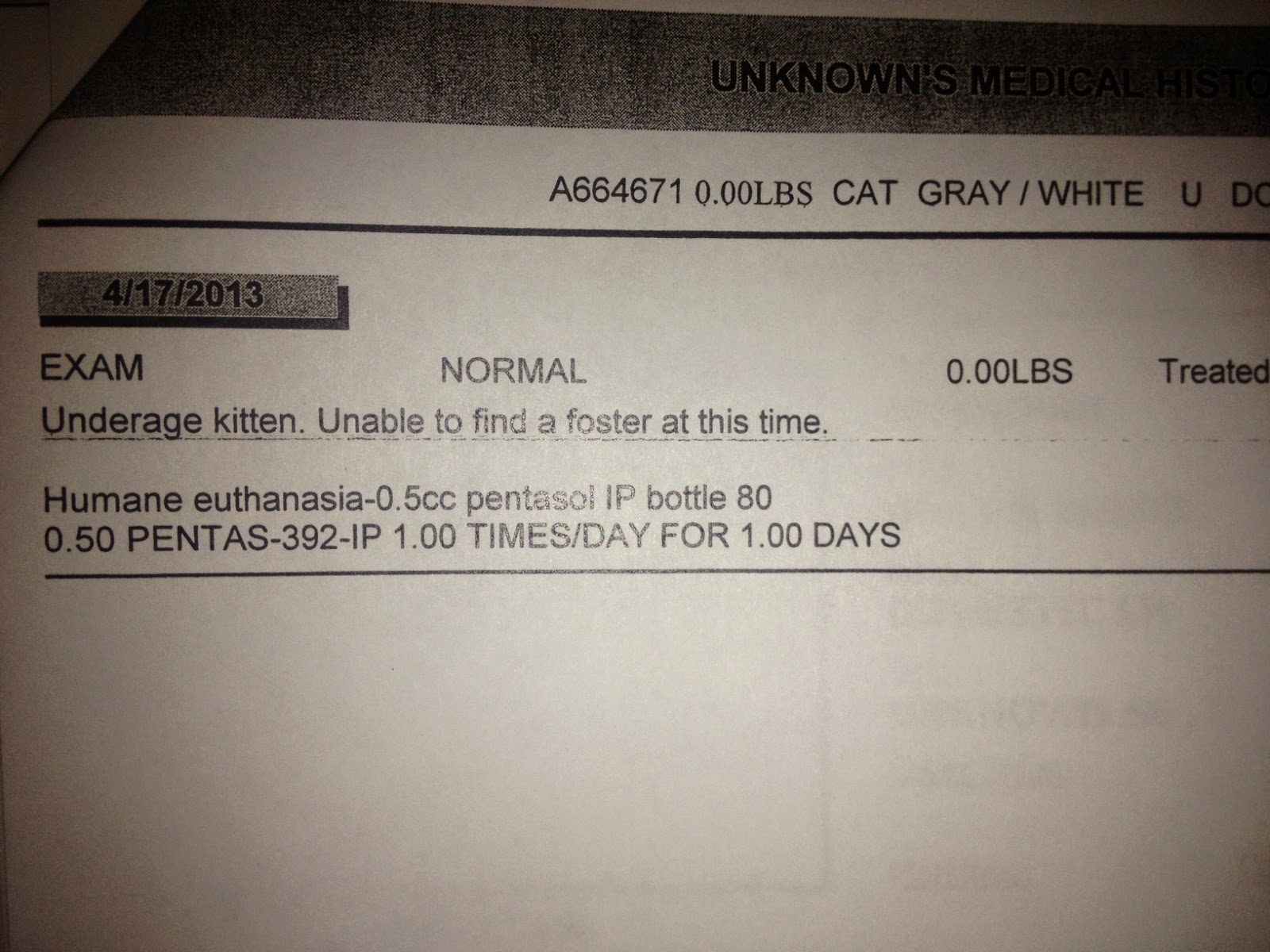 Staff obviously did not take these animals home either to care for overnight and bring back the following day to try again. Therefore, Nathan Winograd’s recommendations have not been taken to heart regarding foster care and saving every possible life. Shelter Director Veronica Fincher fired the "2011 Foster Parent of the Year" at the shelter, because this volunteer spoke out about conditions at the shelter. And then they have the audacity to continue to kill kittens by saying they don't have enough fosters. (http://www.dailybulletin.com/social-affairs/20130128/animal-rights-group-raises-debate-over-no-kill-direction-of-rancho-cucamonga-animal-shelter).

Yet the 6 Page 2013 Annual Report makes it sound as if everything is under control and every foster animal that comes to the Center is given care and makes it out alive. This continues to mislead the community in thinking the Center is truly “No Kill”. The Rancho Cucamonga City Council has been made aware of this on several occasions, and with the exception of Councilman Bill Alexander, they have done nothing to address the lies in the Annual Report and how the Director continues to move away from its original "No Kill" goal.