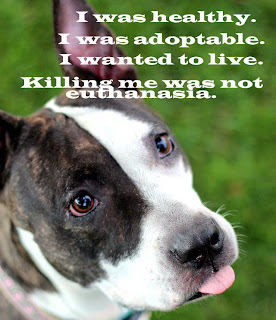 Welcome to Shelter Shenanigans! This blog is dedicated to keeping the public educated and up to date about the ludicrous situation at the Rancho Cucamonga Animal Care and Adoption Center (RCAC), located in Rancho Cucamonga, CA. This includes increased killings of treatable animals, volunteers being targeted and even dismissed from service for speaking out about conditions. Successful programs being cut or reduced, and other acts that we will hence forth refer to as "shenanigans". All of this stemming from the hiring of a Director in December 2011, who came from a kill shelter, and was expected to take the RCAC to "no kill", which had been voted by the RC City Council in 2005.

THAT Group stands for Together Helping Animals Thrive, and we are an advocacy group dedicated to bringing about animal shelter reform through increased transparency and accountability from shelter management and city officials. We were formed after current RCAC Director Veronica Fincher, made a derogatory remark referring to a group of concerned shelter volunteers who spoke out at a city council meeting in June 2012 (and were subsequently fired from their volunteer service for doing so).

We have started a website www.thatgroup.info, which provides a timeline for the events that have transpired at the RCAC, as well as videos and stories that focus on the some animals who did not make it out of the shelter alive. We honor their memory by telling their stories, in order to help people understand that not all "shelters" are doing everything they can to save the animals that are supposed to be under their "care". Shelter management and City Officials hoped to silence us, by retaliation killing of animals we worked with, then firing us from our volunteer service once we spoke out about what was happening, and then by trying to ignore us when we come to city council meetings as concerned, taxpaying residents.

They underestimated us. We are committed to letting the residents of Rancho Cucamonga know what is going on at THEIR city shelter. The RCAC Director and City Manager, John Gillison, have been in full propaganda mode and continue to pull the wool over the public's eyes by using subjective terms and banking on the city council's lack of knowledge regarding shelter reform. They continue to say the RCAC is "thriving", and that is certainly true for the staff, who have carte blanche to do what they want, as long as they do not speak critically of the Director. We will also continue to post the videos from the RC City Council Meetings on our YouTube Channel called "Reform Rancho" and here on our blog.

But the ultimate question, that the shelter management and City officials seem to keep glossing over, "Is the shelter thriving for the animals?" No, it is not. Public Records requests have revealed that more animals were killed during Veronica Fincher's first year as Director in 2012, even though intake of animals was down. The number of dogs killed for "behavior or medical" reasons increased by 22% in 2012 compared to 2011. The number of rescues the shelter worked with was cut in 2012, and as a result, 35% fewer animals were sent to rescue compared to 2011. The number of volunteers have also decreased since Director Fincher took over the RCAC. Luna, the beautiful, silly girl in the picture above is one of the wonderful dogs who make up these sad statistics. Her story can be seen on our YouTube video "Loosing Luna". Again, how can the shelter be considered to be thriving?

THAT Group members, concerned shelter volunteers, and members of the public have attended every City Council Meeting (except one) since January 2013, trying to get the City Council to adopt new policies and procedures, that will help get the RCAC back on track to reach a "no kill" goal (this entails achieving a minimum 90% save rate for all animals entering the shelter). Some members of the City Council have been supportive, others continue to believe the fodder being spoon fed to them by the Director and City Manager, and choosing to ignore the dire situation of the animals at the center and the people who want to help them. Our remains to educate and try to work with the city council members, in order to show them that there is a better way, and that Rancho can save more animals in a cost effective manner. The RCAC could be a model for other municipal, open admission shelters; but in order to do this, big changes are needed and this is where the public needs to step in.

So stay tuned, and we promise to provide you with updates. There will be laughter, tears, frustration, but ultimately hope and change. That is what "Shelter Shenanigans" is all about!
Posted by THAT Group at 4:43 PM No comments: